Welcome to World Friendship Center!  We are a not-for-profit peace organization founded in 1965 in Hiroshima Japan by Barbara Reynolds. For over 55 years we have provided a place where people from many nations can meet, share their experiences and reflect on peace. Our motto is “to foster peace, one friend at a time.”

WFC is made up of volunteers and staff dedicated to providing a place to tell the stories of Hibakushas (A-bomb survivors) and to support guest Peace Studies through guided tours, hearing Hibakusha talks, and the story of WFC as it has carried on the vision of Barbara Reynolds in advocating for the elimination of nuclear weapons.

Our English-speaking directors, volunteers, and staff are dedicated to providing you with an in-depth learning experience in Hiroshima, the city of peace, that you will not soon forget! 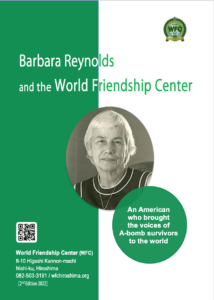 Barbara Reynolds came to Hiroshima in 1951 with her husband Earle Reynolds and her three children. Earle had been sent as a part of a U.S. study team charged with examining children exposed to radiation, in conjunction with the Atomic Bomb Casualty Commission (ABCC). Three years later Barbara, Earle, and two of their children left Hiroshima with three young Japanese crewmen on their newly launched yacht, named "Phoenix of Hiroshima".

Traveling around the world in their own yacht had been a lifelong dream. As they traveled, the family's interest in world peace developed. The people they met asked questions of their Japanese crewmen about the aftereffects of the atomic bomb. The Reynolds learned more as they listened. They also witnessed the heroic deeds of some protesters against nuclear testing in the South Pacific who sailed into the "forbidden zone" where the testing was being done and were put in jail. With a sense of mission, Barbara and her family decided to protest by sailing in to the "forbidden zone" themselves. This resulted in Earle's arrest. They also protested after returning to Hiroshima against the Soviets' nuclear testing by sailing their yacht to Nakhodka and carrying protest letters against Russia's nuclear testing. The USSR, however, rejected their request to dock.

After a rough voyage back from Russia to Hiroshima, Barbara began a Peace Pilgrimage taking along a hibakusha (A-bomb victims) and a young man who was orphaned by the A-bomb. They took the story of Hiroshima's suffering to 12 countries, including all of the nuclear nations. Back in Hiroshima again, she invited Francis Ross, whom she had met on the Peace Pilgrimage, to come to Hiroshima from California for a year to help open a house called Friendship Center. It was to serve as a place where visitors from around the world could meet hibakusha. In 1964 Barbara left with a much larger group of hibakusha and interpreters on a World Peace Study Mission going to eight countries including four countries - USA, France, England and Soviet - that had nuclear weapons and 150 cities over the 75-day mission. 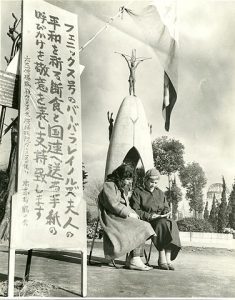 Barbara with her daughterJessica 1961
©Chugoku Newspaper

In August, 1965, the World Friendship Center was dedicated. It continues as a center for building friendships and promoting peace. In 1969, Barbara returned to the U.S. to live, devoting herself to helping refugees from Cambodia and Vietnam. Now directors come from the U.S. to volunteer their time and services to keep the Center operating.  Dr. Tomin Harada, a Hiroshima surgeon who was the first honorary chairman of WFC called Barbara "Kashin," or "Hearing from Flowers." The term "Kashin" is associated with someone who sows seeds, but lets others enjoy the results of his/her deeds.

As a Quaker, Barbara lived with faith, praying before acting, and acting with a deep love of humanity. She died on February 11, 1990. Barbara donated her extensive library of books on Hiroshima, Nagasaki, nuclear weapons, and war and peace, and was a major force in the inauguration of the Hiroshima-Nagasaki Memorial Collection, which is a part of the Peace Resource Center (PRC) on the campus of the Wilmington College in Ohio. 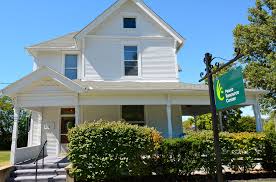 As Barbara was leaving Hiroshima in 1969
she delivered an address to the people of Hiroshima
expressing her hope for world peace in the future.
Read her farewell address to understand
her vision for the future of Hiroshima as a city of hope.

READ "Hiroshima, City of Hope"
Scroll To TopContact Us